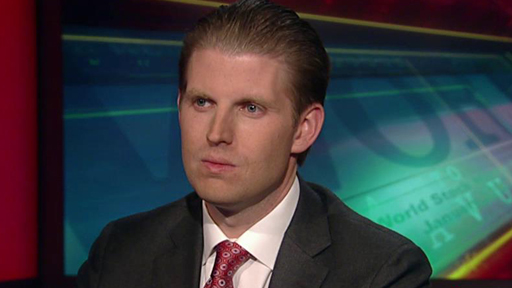 Speaking in Colorado yesterday, Eric Trump told volunteers at a campaign office that his father’s vulgar comments in a 2005 Access Hollywood video were just “locker room banter,” and the result of “alpha” males being in the same room.

“I think that’s Hillary going low,” the younger Trump said in the campaign’s Denver office, after he greeted volunteers. “I think you’ve seen that for a long time. If you look at her track record with women, I think you saw that yesterday with some of the people we had sitting at the debate. It’s horrible. She’ll dig out dirt on someone from 15 years ago when someone is in entertainment.

“And, listen, my father apologized for it. He was right to apologize for it, and I’m glad he apologized for it. At the same time, if you look at her track record with women, it’s horrible. It’s absolutely horrible.” There has been no evidence that the Clinton campaign released the damaging tape. Eric Trump said he was “surprised it came out.”

“At the same time, I think it’s locker room banter,” he said, repeating his father’s description of it. “I think sometimes when guys are together they get carried away, and sometimes that’s what happens when alpha personalities are in the same presence. At the same time, I’m not saying it’s right. It’s not the person that he is.”

There’s no evidence to indicate that Clinton or her campaign were involved in the discovery of the Access Hollywood video.