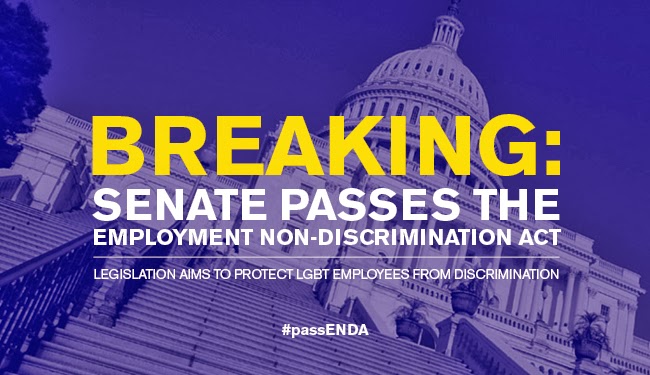 Via HRC press release: Today, the U.S. Senate voted 64 to 32 to pass the Employment Non-Discrimination Act (ENDA) for the first time in the legislation’s two-decade history. All Senate Democrats joined 10 Senate Republicans to approve the bill.

“Today, a strong bipartisan majority of the United States Senate made history by standing up for a fundamental American truth. Each and every American worker should be judged based on the work they do, and never based on who they are. This broad Senate coalition has sent a vital message that civil rights legislation should never be tied up by partisan political games.

“We firmly believe that if the House of Representative were freed by Speaker John Boehner to vote its conscience, this bill could pass immediately. It’s unconscionable that any one person would stand in the way of this crucial piece of the civil rights puzzle.”