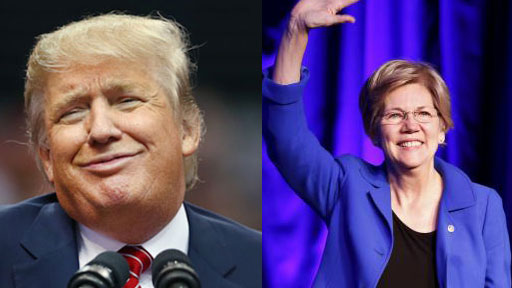 Donald Trump has been mocking Sen. Elizabeth Warren of Massachusetts for years over her claim that she is part Native American.

We’ve seen him time after time at campaign rallies refer to her as “Pocahontas.”

He even promised at a July 5 rally in Montana to donate $1 million to her favorite charity if she would submit to a DNA test and prove she’s part American Indian.

Guess who took a DNA test?

There is “strong evidence” that Ms. Warren has Native American pedigree “6-10 generations ago,” according to a document she released from Carlos Bustamante, a renowned geneticist from Stanford University. The error rate is less than one-in-a-thousand, he said.

In releasing a DNA test, Ms. Warren, a Massachusetts Democrat, was rebutting the taunts of Mr. Trump and other conservatives, who have mocked her as “Pocahontas” and claimed she used her heritage to gain an advantage when she was a law professor.

By the way, @realDonaldTrump: Remember saying on 7/5 that you’d give $1M to a charity of my choice if my DNA showed Native American ancestry? I remember – and here's the verdict. Please send the check to the National Indigenous Women’s Resource Center: https://t.co/I6YQ9hf7Tv pic.twitter.com/J4gBamaeeo— Elizabeth Warren (@elizabethforma) October 15, 2018

Trump conveniently doesn’t remember any such promise about a $1 million donation.

Let’s go to the video tape: