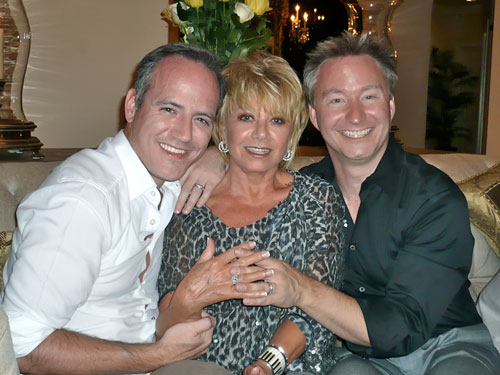 A few years ago, Michael and  I had a fantastic time spending the evening with the first lady of London theater, Elaine Paige.  We were at a great party in Palm Springs and, thrillingly for me, we found ourselves chatting for much of the evening.  She couldn’t have been more fun and sassy.  Having had a career in the theater myself, I enjoyed every minute.  My first big show was CATS, and of course Elaine had created the role of Grizabella singing the haunting “Memory.”

In addition to a shared history of wearing yak hair, we have a few other things in common.  We are both cancer survivors, have fairly short “blond” hair, enjoy an occasional glass of wine and we both have a history with a certain Stephen Sondheim musical.

Elaine is currently stopping the show on Broadway in FOLLIES at the Marquis Theatre.  I’m seeing Elaine and company  in a few weeks and can’t wait.  My last Broadway show was the first revival of FOLLIES over ten years ago, which I was very proud to be a part of.  We closed that production on my birthday, which I share with Polly Bergen, who was nominated for a Tony Award for her performance in the same role Elaine is performing today.  So there are many threads that weave in and around our meeting and enjoying each other’s company.

From the NY Times: Ms. Paige is happy to discuss: “Follies,” the 1971 James Goldman and Stephen Sondheim musical that many critics viewed as ailing when it opened at the Kennedy Center in Washington in May, but which, after coming to New York this fall, has been hailed as a miracle of reincarnation. Ms. Paige, in the role of the actress Carlotta Campion, sings “I’m Still Here,” an anthem of showbiz survival, “with a galvanizing fierceness that makes this much-performed song sound fresh and stinging,” Ben Brantley wrote in The New York Times.

The song includes the lines to which few mature actresses do not relate: “First you’re another sloe-eyed vamp, then someone’s mother, then you’re camp. Then you career from career to career.”

When asked if she were to rewrite a few lines of “I’m Still Here” for her own life, how would it go?

Sing along with Elaine:

Due to the talent of

Queues ’round the block

So get in line, while we’re here

Lord knows it’s great to be back