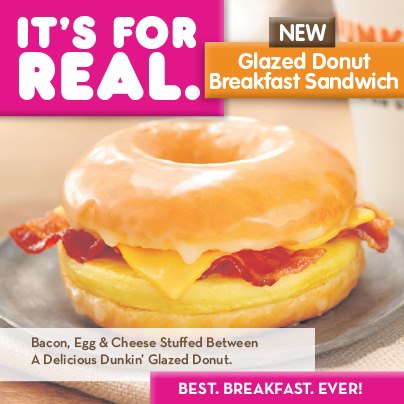 This is, apparently, a real thing.

Dunkin’ Donuts is adding a doughnut breakfast sandwich to its national menu this week.

The sandwich, which comes with fried eggs and bacon between a split glazed doughnut, will become a part of the permanent menu starting June 7, which the chain claims is “National Donut Day.”

Notably, Dunkin’ Donuts says the “Glazed Donut Breakfast Sandwich” clocks in at 360 calories, which is less than the 390 calories for the turkey sausage sandwich it recently introduced for people looking to eat better.