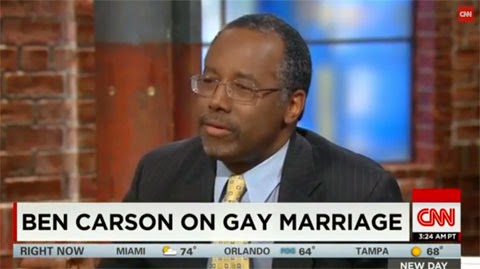 As I reported yesterday, retired neurosurgeon (and probable GOP candidate for president in 2016) Dr. Ben Carson claimed on CNN that homosexuality is definitely a choice and he could prove it because folks have sex in prison.

He then appeared on Sean Hannity’s show and claimed that CNN had edited the interview (even though there were no quick cuts to be seen) that took his statement out of context.

During a radio discussion this afternoon with Sean Hannity, Carson blamed the ordeal on CNN. “It was a 25 minute interview they chopped, and you see what part they emphasized,” he said. “I did learn something very important: For certain networks, never do a pre-taped interview. Always do it live.”

Carson continued: “I simply have decided I’m not really going to talk about that issue anymore because every time I’m gaining momentum the liberal press says, ‘Let’s talk about gay rights.’ And I’m just not going to fall for that anymore.”

The problem with Carson’s attempt to play victim here is that, during that sequence of the CNN interview, there were clearly no jump-cuts and no edits — just a straight back-and-forth about whether homosexuality is a choice. Playing this off with a “gotcha media vs. poor ol’ Ben Carson” spin isn’t exactly going to cut it. Sometimes your words are just your words.

Then last night, Carson took to his Facebook page to issue an apology saying he “answered a question without really thinking about it thoroughly.” That part is a bit perplexing in that he’s spoken out about homosexuality often; and, he was unequivocal in his opinion on CNN.

See his apology below:

In a recent interview on CNN, I realized that my choice of language does not reflect fully my heart on gay issues.

I do not pretend to know how every individual came to their sexual orientation. I regret that my words to express that concept were hurtful and divisive. For that I apologize unreservedly to all that were offended.

I’m a doctor trained in multiple fields of medicine, who was blessed to work at perhaps the finest institution of medical knowledge in the world. Some of our brightest minds have looked at this debate, and up until this point there have been no definitive studies that people are born into a specific sexuality. We do know, however, that we are always born male and female. And I know that we are all made in God’s image, which means we are all deserving of respect and dignity.

I am not a politician and I answered a question without really thinking about it thoroughly. No excuses. I deeply regret my statement and I promise you, on this journey, I may err again, but unlike politicians when I make an error I will take full responsibility and never hide or parse words. As a human being my obligation is to learn from my mistakes and to treat all people with respect and dignity.