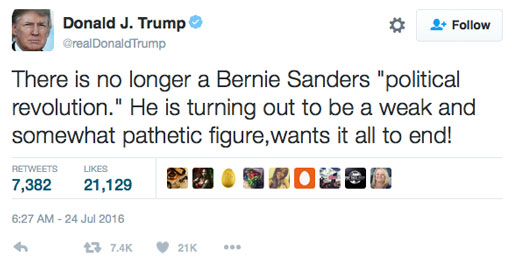 Republican presidential candidate took to Twitter today to criticize Sen. Bernie Sanders saying he is “turning out to be a weak and somewhat pathetic figure.”

I’d remind you all that Trump has repeatedly begged Sanders’ supporters to vote for him.

Good luck with that, Donald.

There is no longer a Bernie Sanders “political revolution.” He is turning out to be a weak and somewhat pathetic figure,wants it all to end!