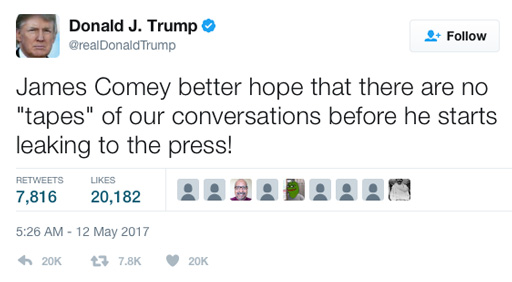 Because this is totally normal.

“James Comey better hope that there are no “tapes” of our conversations before he starts leaking to the press!”

Former FBI Director James Comey is “not worried about any tapes” of conversations between him and President Donald Trump, a source familiar with the matter told CNN Friday, adding that “if there is a tape, there’s nothing he is worried about” that could be on it.

And then there’s this from NBC reporter Ken Dilanian:

A source close to Comey told me this morning: “He hopes there are tapes. That would be perfect.”— Ken Dilanian (@KenDilanianNBC) May 12, 2017