I was watching CNN this afternoon when this exchange happened. It was beyond cringe worthy.

Few moments encapsulate the Trump campaign like this does.

Besides Michael Cohen’s petulant tone and body language, his total faux-ignorance on the fact that his boy is flailing in the polls is worse than painful.

These 26 seconds are what everyone is talking about today. #sad

Cohen balked at the idea that the hires constituted any kind of shakeup and interrupted Keilar in the middle of a follow-up question when she said, “You say it is not a shakeup but you guys are down.”

“Polls. Most of them. All of them?” an incredulous Keilar responded, sounding surprised that Cohen would refuse to even acknowledge the notion that Trump’s campaign had fallen behind that of Hillary Clinton.

“Says who?” Cohen asked again, to which Keilar replied, “Polls. I just told you. I answered your question.”

In the vernacular of Donald Trump – #Sad #Loser

Just in cause you’d like a visual reminder, this is a screen capture from today’s Real Clear Politics list of recent national polls.

Please note all the blue annotations on the right signifying a Clinton lead. Click the image to enlarge. 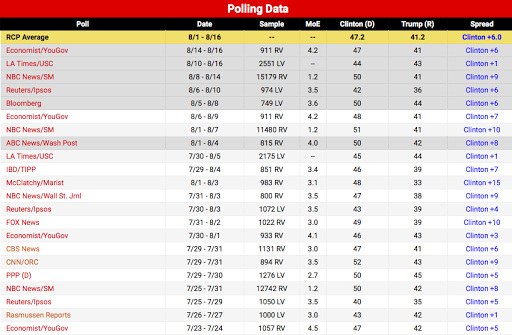