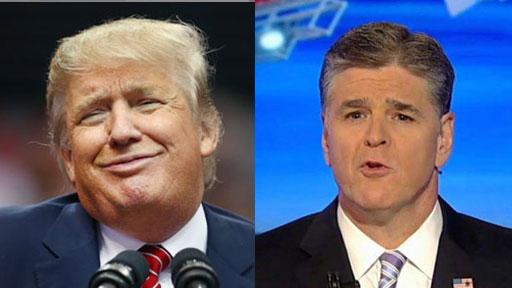 It’s like they’re best girl-friends who have to talk to each other every night before bed.

Their chats begin casually, with How are yous and What’s going ons. On some days, they speak multiple times, with one calling the other to inform him of the latest developments. White House staff are aware that the calls happen, thanks to the president entering a room and announcing, “I just hung up with Hannity,” or referring to what Hannity said during their conversations, or even ringing Hannity up from his desk in their presence.

On the phone, he and the president alternate between the “witch hunt!” and gabbing like old girlfriends about media gossip and whose show sucks and who’s getting killed in the ratings and who’s winning (Hannity, and therefore Trump) and sports and Kanye West, all of it sprinkled with a staccato fuck … fucking … fucked … fucker. “He’s not a systematic thinker at all. He’s not an ideologue,” one person who knows both men said of Hannity. “He gives tactical advice versus strategic advice.”

“Hannity was always someone where, if you were a Republican and you went on his show, it would be the easiest interview possible,” a person who worked on the campaign of one of Trump’s Republican-primary rivals told me. “It was legitimately impossible to get jammed up by Sean Hannity. It wasn’t even something you’d consider. It was the softball of softball interviews.”