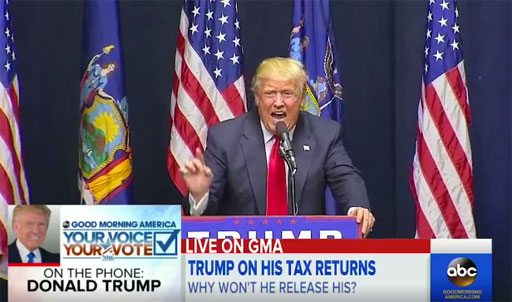 As everyone knows, every presidential candidate since 1976 has released their tax returns.

Earlier this year, Donald Trump promised to do so. Now, he’s decided he won’t.

Or, at least, it may not be before the general election in November.

Joining “Good Morning America” this morning, ABC News’ George Stephanopoulos asked Trump what his tax rate is, and Trump simply replied, “It’s none of your business.”

“You’ll see it when I release but I fight very hard to pay as little tax as possible,” Trump said.

The billionaire also said he has no foreign bank accounts and emphasized he runs a “clean” business.

Trump went to say that he doesn’t not believe that voters have a right to see his tax returns before they vote, but that he would gladly made them public once the audit is over.

Stephanopoulos asked Trump: “Yes or no, do you believe voters have a right to see your tax returns before they make a final decision?”

“I don’t think they do. But I do say this, I will really gladly give them,” Trump answered, adding he has no problem releasing him and he hopes it’s before the election.

Trump went on to divert to Hillary Clinton’s “Goldman Sachs speeches” that she hasn’t released. It goes without saying that every candidate since 1976 HASN’T released transcripts of their paid speeches when out of office.

It says a lot that Trump was willing to release his taxes to get a casino license, but the American public don’t deserve the same opportunity.