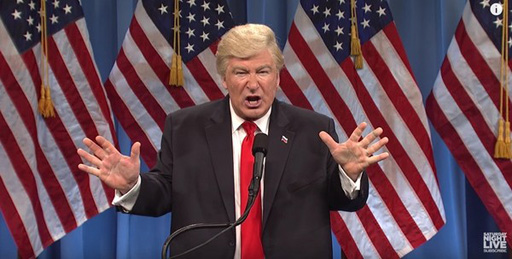 Alec Baldwin recently tweeted (how very Trump-like) following Donald Trump’s first press conference in six months that he “has all the material he needs.”

And it appears he was correct.

Last night’s cold open for Saturday Night Live presented the SNL version of the presser, and I’m not sure which was more outrageous.

“I’d like to start by answering the question that’s on everyone’s mind. Yes, this is real life. This is really happening. On January 20, I, Donald J Trump, will become the 45th president of the United States. And then two months later, Mike Pence will become the 46th.”

“I am not talking about the pee pee. Because it didn’t happen. And it wasn’t as cool as it sounds. Next question….I do not want talk about the pee pee. I want to talk about what is really important which is jobs because I’m going to bring back a thick stream of jobs back in this country. The biggest strongest steadiest stream you’ve ever seen. This country will literally be showered with jobs. Because I’m a major wiz at jobs. And this’ll be a golden opportunity for me as president to make a big splash. I know you’re in. How bout you? Urine? Urine? Urine? Urine?”

Watch the full sketch below: