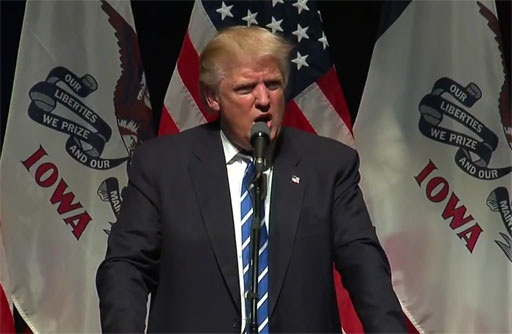 Playing the victim card this morning, GOP presidential contender Donald Trump told supporters he “wanted to hit a couple of those speakers so hard their heads would spin.”

The Donald went on to whine several times that “they were saying such terrible things about me.”

Mind you, this is the man who calls Hillary Clinton “Crooked Hillary” and has made up demeaning nicknames for all his opponents.

I think Hillary Clinton was right last night when she said, “Donald Trump can’t even handle the rough-and-tumble of a presidential campaign. He loses his cool at the slightest provocation… Imagine him in the Oval Office facing a real crisis. A man you can bait with a tweet is not a man we can trust with nuclear weapons.”

Donald Trump says he would like to ‘hit’ DNC speakers who disparaged him https://t.co/Fv7pT2DzlB pic.twitter.com/EbZENsqudk