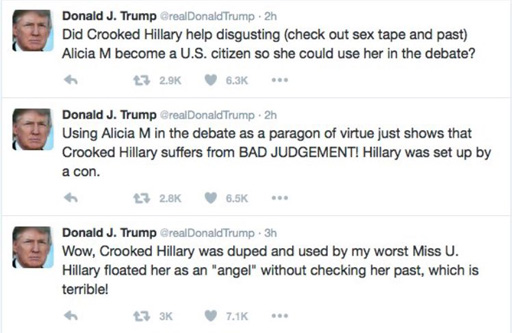 You’ll recall Machado is a former Miss Universe that Trump called “Miss Piggy” and “Miss Housekeeping” when he felt she gained weight during her reign in the 1990s.

Her name became a presidential talking point when Hillary Clinton brought up her treatment at the hands of Trump near the end of the first presidential debate.

Since then, Trump surrogates have hit the political talk shows with Trump campaign-issued talking points directing supporters to trash Machado.

Apparently, those attacks weren’t sharp enough for the Trumpster as he took to Twitter at 5:14AM urging his followers to “check out [her] sex tape and past.”

Those tweets would be strange enough if they were accurate, but they don’t even rise to that standard. As the Daily Beast reported, “The alleged ‘sex tape’ Trump urged followers to ‘check out’ is non-explicit footage from a Spanish reality-TV show in which the Venezuelan model supposedly had sex with a fellow participant.” A separate Daily Beast report notes that “there does not appear to be any evidence suggesting the existence of professionally made pornography starring Machado.”