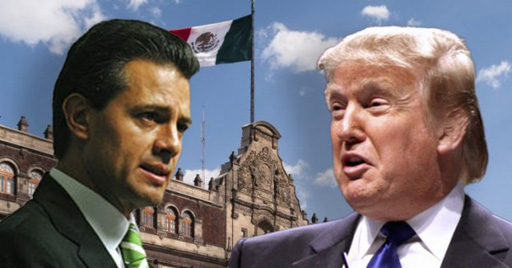 Now that Donald Trump is back across the border from Mexico where he met with Mexican President Enrique Peña Nieto yesterday, both men are feeling quite macho again.

After a bit of a timid and low energy appearance with the Mexican president, Trump is again bragging that Mexico will “pay for the wall” that Trump says will make the U.S. borders safe again.

Peña Nieto, however, is being all bold and stuff saying again that Mexico will not be paying for any wall. “I’ll repeat what I told you personally, Mr. Trump: Mexico will never pay for a wall,” he wrote via Twitter.

The odd thing about all this is that Trump said during the very short press event yesterday that the two men did not discuss who would pay for a wall – with the president standing right there.

It wasn’t until Trump was back in the air that Peña Nieto informed the press that during their private chat he told Trump directly that paying for a wall was off limits.

It’s all a big “he said/he said” from two very unpopular public figures.

Mexico will pay for the wall!