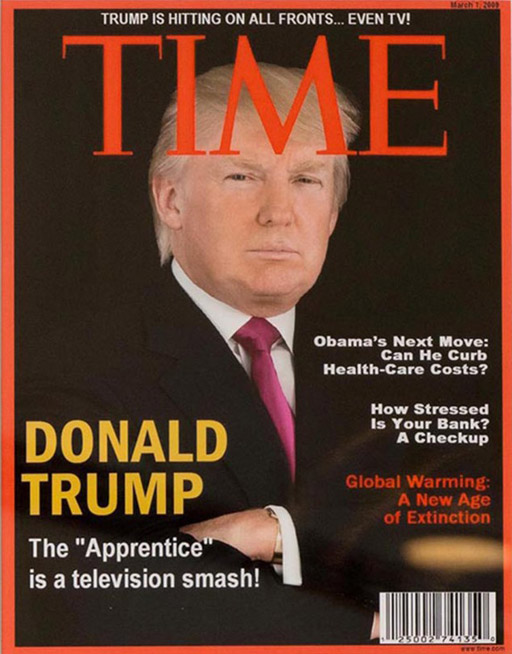 The man who yells “fake news” has been decorating his golf clubs with literal fake news.

Maybe this is why he cries “fake news” so often. He’s been creating it for years.

The framed copy of Time magazine was hung up in at least five of President Trump’s clubs, from South Florida to Scotland. Filling the entire cover was a photo of Donald Trump.

“Donald Trump: The ‘Apprentice’ is a television smash!” the big headline said. Above the Time nameplate, there was another headline in all caps: “TRUMP IS HITTING ON ALL FRONTS . . . EVEN TV!”

This cover — dated March 1, 2009 — looks like an impressive memento from Trump’s pre-presidential career. To club members eating lunch, or golfers waiting for a pro-shop purchase, it seemed to be a signal that Trump had always been a man who mattered. Even when he was just a reality TV star, Trump was the kind of star who got a cover story in Time.

But that wasn’t true.

The Time cover is a fake.

In fact, the cover on display at Trump’s clubs, observed recently by a reporter visiting one of the properties, contains several small but telling mistakes. Its red border is skinnier than that of a genuine Time cover, and, unlike the real thing, there is no thin white border next to the red. The Trump cover’s secondary headlines are stacked on the right side — on a real Time cover, they would go across the top.

And it has two exclamation points. Time headlines don’t yell.

“I can confirm that this is not a real TIME cover,” Kerri Chyka, a spokeswoman for Time Inc., wrote in an email to The Washington Post.

You may recall that during a speech in January addressing CIA staff, Trump declared he had been on more Time covers than anyone else: “I think we have the all-time record in the history of Time magazine.”

Of course, the Trumpster had to deny and deflect via Twitter this morning:

The #AmazonWashingtonPost, sometimes referred to as the guardian of Amazon not paying internet taxes (which they should) is FAKE NEWS!— Donald J. Trump (@realDonaldTrump) June 28, 2017