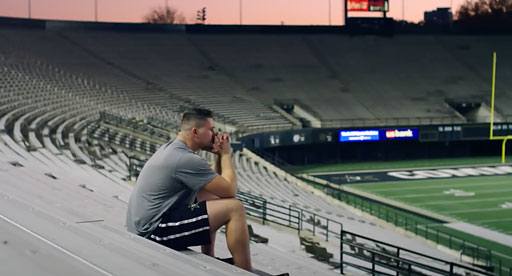 A new documentary from AT&T Audience Network, Alone in the Game, reveals the constant challenges that LGBT athletes face in the competitive arena of pro sports.

In a sobering moment that illustrates how deep the fear of coming out in pro sports can be, former NFL lineman Ryan O’Callaghan admits, “I’d always planned on killing myself when I was done with football.”

“I thought I’d rather be dead than an out gay man,” he adds.

In one scene of the film, a gay Division I football player asked to have his face and voice disguised to explain why he won’t come out of the closet: “I’m not ashamed, just scared.”

“If there wasn’t homophobia in sports, and if everyone felt comfortable to be who they were, then everyone who was gay would be out,” says Olympic soccer player Megan Rapinoe.

“We’re giving viewers a rare look into the lives of these elite athletes’ unique journeys and open their eyes to the daily challenges these athletes face on and off the field of play,” says executive producer and creator of Alone in the Game, David McFarland.

“With added attention to this issue, I’m hopeful we can affect real change at the highest levels of American sport and that the next generation of LGBTQ athletes will be judged by their athletic performance, rather than their sexual orientation or gender identity.”

With the retirement of Robbie Rogers from pro soccer and Jason Collins from the NBA, there are currently no out athletes in any of the major professional team sports in the U.S.

Watch the trailer below. Alone in the Game premieres June 28 on AT&T Audience Network.