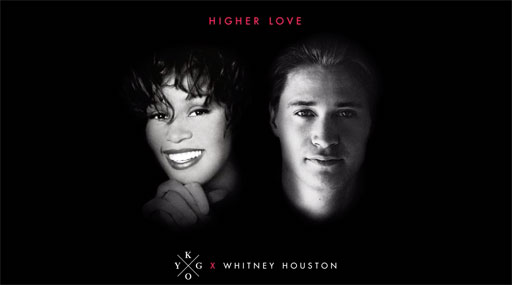 “Higher Love” is the first new Whitney Houston music released in a decade, since 2009’s “I Look To You.”

Previously, Houston’s take on the 1986 Steve Winwood hit was available as a ‘Japan-only’ bonus track on her 1990 album, I’m Your Baby Tonight.﻿

Music industry legend Clive Davis told Rolling Stone the decision to omit the track on the U.S. release was an effort in avoiding her being viewed as a cover artist at that time.

And so, the track has been a prized rarity among hardcore Houston fans over the years.

The Whitney Houston estate presented Kygo with the archival recording of Whitney’s version, and Kygo raced into the studio, thrilled for the opportunity to make music with one of the greatest female vocalists of all time.

“I was honored when the Whitney Houston estate reached out and presented me with the opportunity to work with one of the greatest female vocalists of all time,” said Kygo in a statement. “I reworked the song from scratch and am really happy with how it turned out!”

Recorded when Houston was in peak vocal form, the first notes from the diva feel like an old friend walking in the room. That voice – rich, robust, with just the perfect edge – is full of unbridled joy.

The production – thoroughly modern with threads of gospel choir woven in with undeniable deep beats – is fresh and exhilarating. Instead of merely remastering the track, Kygo stripped away the previous production and started from scratch to create a new track around the gorgeous Houston vocals.

“I was trying to make it sound like something that she would’ve done, but also something that’s my style,” he told Rolling Stone.

Kygo will perform the song this Sunday, June 30th, at PrideFestival Utopia in New York City.