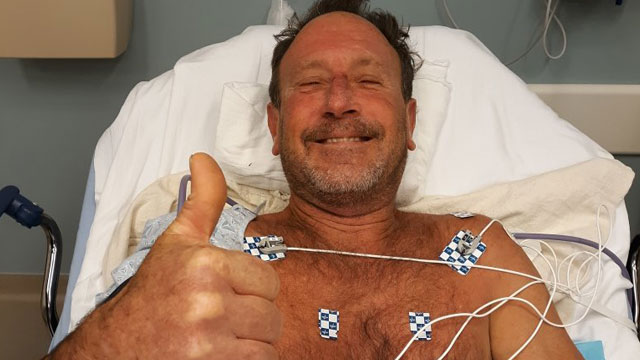 A Massachusetts lobster diver was swallowed by a humpback whale off the coast of Cape Cod on Friday morning before being spit out.

Michael Packard, 56, of Wellfleet, told WBZ-TV after he was released from Cape Cod Hospital that he was about 45 feet (14 meters) deep in the waters off Provincetown when “all of a sudden I felt this huge bump, and everything went dark.”

He thought he had been attacked by a shark, common in area waters, but then realized he could not feel any teeth and he wasn’t in any pain.

“Then I realized, oh my God, I’m in a whale’s mouth … and he’s trying to swallow me,” he said. “And I thought to myself OK, this is it — I’m finally — I’m gonna die.” His thoughts went to his wife and children.

He estimates he was in the whale’s mouth for about 30 seconds, but continued to breathe because he still had his breathing apparatus in.

Then the whale surfaced, shook its head, and spit him out. He was rescued by his crewmate in the surface boat.

WHALE OF A TALE: A Massachusetts man describes being "thrown in the air" after he says he was nearly swallowed by a humpback whale. 😱 pic.twitter.com/azmkbB1TDX