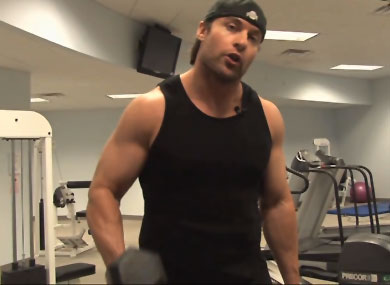 Radio listeners in Cleveland received a rude jolt yesterday morning when Dominic Dieter of Rover’s Morning Glory — a talk show on the massively influential WMMS 100.7, “The Buzzard” — told a father that his possibly-gay daughter should be raped straight.  From GLAAD:

According to the incident reports (and later confirmed to us by an executive for Clear Channel, the station’s parent company), the anti-gay remark was made by Dominic Dieter, one of the “Rover’s Morning Glory” cast members.  Responding to an e-mail from a father who (for reasons unknown) wrote to the station to say that he’d happened upon his teenage daughter kissing another girl. Deiter responded to the father, on-air, by saying:

“You should get one of your friends to screw your daughter straight.”

This is not okay. Not on any level, and not in any context. We trust that the majority of fair-minded Americans will agree. Make no mistake, if this young woman is, in fact, gay – or if she’s simply not interested in having sex with any of her father’s friends, then what Dieter is suggesting is rape.

That’s right, Dieter. Rape is not funny, and “corrective rape” happens to be a real and hideous thing.
GLAAD’s calling for Dieter’s suspension, and for an apology, and for Rover’s Morning Glory to produce “a segment speaking about the real harms that can come from parental rejection.” If you’d like to let WMMS know your thoughts, you can email the station at feedback@wmms.com, and the general manager, Gary Mincer, may be reached at 216-520-2600.

UPDATE: Over the weekend Dieter apologized for his comments:

“I just wanted to say that, I know on the show this past Friday I made
some comments that people found…..  considered to be offensive.  And I
just wanted to say, I understand why people are angry.  I want to
genuinely apologize to anyone who may have been offended by what I
said.  I regret what I did say.  My comments were inappropriate.  They
were inexcusable, and just downright stupid.   And I want to make it
clear; there was absolutely no intention to promote physical or sexual
violence.  And I’m truly; truly sorry by my poor choice of words that
led people to believe otherwise.  Again, Rover… I just want to apologize
for any pain I might have caused. (…)  I ask people to find it in
their hearts to forgive me.  I am sorry for the words that I did say. ”