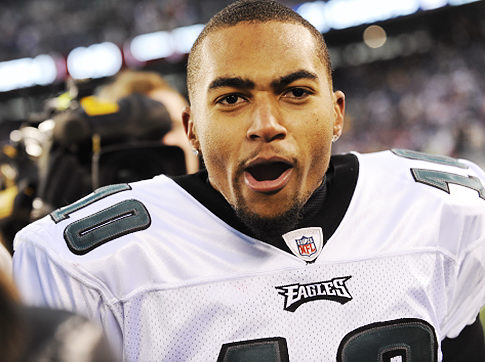 During an appearance on an XM radio show, a caller asked whether Eagles wideout, Desean Jackson, if he had ever “got his dick knocked in the dirt.”  Jackson replied, “What kind of question is that?” and then called Troy from Tennessee a “gay ass faggot.”

The host of the XM satellite radio show – Rude Jude – told later said that Jackson shouldn’t apologize because he “is a hood dude,” and for “hood cats, the worst thing you can call someone is a bitch or a faggot. I don’t think he’s homophobic. He’s joking.”

On Saturday, Jackson issued this statement:

“In a recent radio interview a caller got really confrontational with me,” Jackson said through a spokesperson. “I got very heated with the caller, took it a bit too far and did not mean to offend anybody. I meant no disrespect and a better choice of words was needed.”

Jackson’s comments come only days after former Giants’ hero David Tyree said that he believed legalizing gay marriage in New York would be the first step towards society devolving into anarchy.

Basketball stars Kobe Bryant and Joakim Noah were ordered by the NBA to pay fines after using gay slurs to attack a referee and a fan earlier this year.