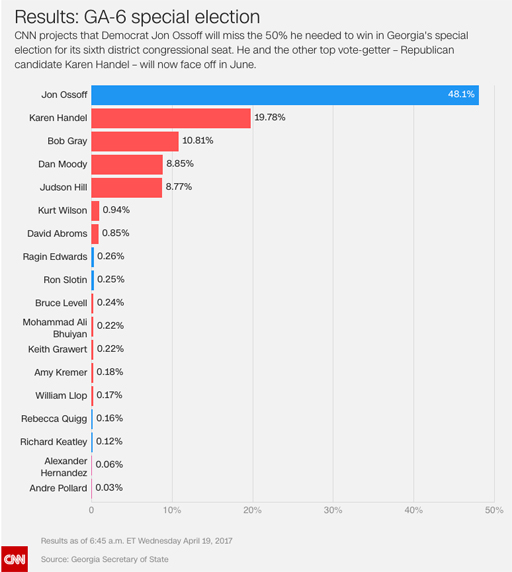 Democrat Jon Ossoff will head into a run off with Republican Karen Handel on June 20 for Georgia’s 6th Congressional seat vacated by now Health and Human Services Secretary Tom Price.

Ossoff fell just short of the 50 percent threshold that would have clinched the seat outright. Ossoff garnered 48.1% of the vote in a heavily Republican district. Handel, who got the second highest number of votes, trailed far behind with 19.8%.

To frame what a big scare this is to Republicans, and to President Trump, Price won his seat last November with 62% of the vote. Mitt Romney won the district by 23 points. But, Trump barely eeked out a win there with a one point margin.

Clearly, the lopsided voting last night was a referendum on the first 100 days of the Trump administration.

Democrats were so engaged in the special election, Ossoff raised over $8.3 million – more than four times his nearest competitor.

“This is already a remarkable victory. We defied the odds, shattered expectations, and now are ready to fight on and win in June.”

This morning, Trump tried to frame the second place showing by Handel as a “win:”

Despite major outside money, FAKE media support and eleven Republican candidates, BIG “R” win with runoff in Georgia. Glad to be of help!