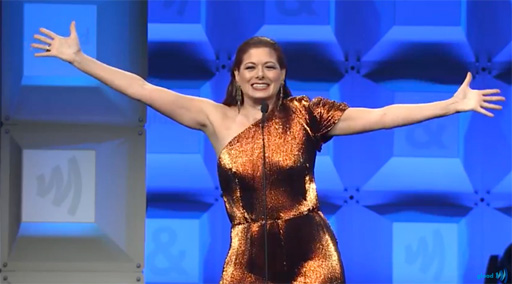 The Excellence in Media Award is presented to media professionals who have made a significant difference in promoting LGTBQ acceptance.

During her remarks, Messing said, “Right now there is a very bad and very orange man in the White House. At least a few days a month.”

But it wasn’t just the president Messing had a message for. She also spoke directly to Ivanka Trump:

“It’s not enough to simply say that women’s issues are important to you. It’s time to do something. You can change the lives of millions of women and children just by telling your dad stories about real people who are suffering.

“Don’t let him separate immigrant mothers from their American-born children. Don’t let him take health care away from women who need it. Don’t allow him to make trans kids like Gavin [Grimm] fight in court for their basic human dignity.”

This fall, Messing and her original Will & Grace costars will return to NBC for a 12 episode reboot of the iconic sitcom.