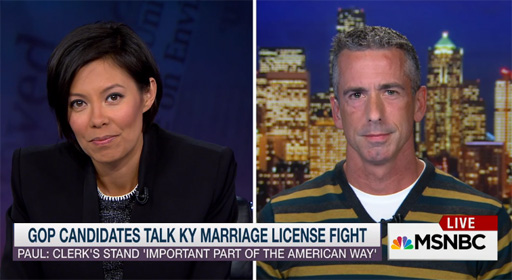 This appearance came shortly after US News and World Report published shocking revelations that Davis, who has been divorced three times, actually gave birth to children fathered by her third husband while she was married to her first. It gets very complicated I know.

“I think Kim Davis is waiting to cash in,” Savage told MSNBC. “I predicted from the beginning that she would defy all the court orders, defy the Supreme Court, she would ultimately be held in contempt of court, lose her job, perhaps go to prison for a short amount of time. And then she will have written for her, ghost written books. She will go on the right-wing lecture circuit and she’ll never have to do an honest day’s work ever again in her life.”

“This is about someone hypocritically cashing in, and she is a hypocrite,” he added.

Savage referred to the defiant clerk’s statement complaining that courts were asking her to “violate a central teaching of Scripture and of Jesus Himself regarding marriage” — which the columnist dismissed as ridiculous.

“This is a woman who’s been divorced three times and married four times,” he said, reading from the US News & World Report article that pointed out Davis “gave birth to twins five months after divorcing her first husband, (and) they were fathered by her third husband but adopted by her second husband.”

I’ve written here on The Randy Report for sometime that while folks are paying attention to the surface of this story – the issuance of marriage licenses – this is actually about Davis looking for a windfall of money via crowdsourcing campaign by anti-gay haters as we’ve seen in the past with pizza makers, florists and bakers. Along the way, Liberty Counsel and other haters get a new face of martyrdom in Davis.

Davis and her full office of deputy clerks have been summoned to federal court Thursday morning regarding possible contempt of court charges.