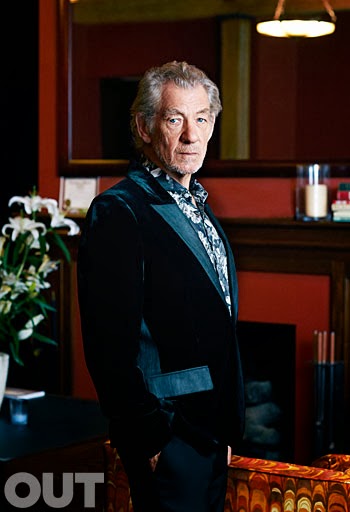 This week in “Celebrity Foot-In-Mouth,” according to The Independent Damien Lewis (currently of Homeland fame) said that in his 20s he was worried about being stuck doing theater, that he feared he’d be: “one of these slightly over-the-top, fruity actors who would have an illustrious career on stage, but wouldn’t start getting any kind of film work until I was 50 and then start playing wizards.”

Although Lewis didn’t name anyone in particular, out actor Sir Ian McKellen, known audiences globally as the wizard Galdalf in the Lord of the Rings/The Hobbit movies, assumed quite reasonably it was a jab at him.

McKellen, ever the class-act, told Radio Times, “So he feels sorry for me, does he? Well I’m very happy, he needn’t worry about me.” He continued that Lewis’ statement as “a fair comment,” and “To rebut it: I wouldn’t like to have been one of those actors who hit stardom quite early on and expected it to continue and was stuck doing scripts that I didn’t particularly like just to keep the income up.” I bet you could hear a pin drop in Lewis’s on-set trailer.

“I’ve always wanted to get better as an actor. And I have got better. You’ve only got to see my early work to see that.”

“As for a fruity voice? Well, it may be a voice that is trained like an opera singer’s voice, to fill a large space. It is unnatural. Actors have to be heard and their voice may therefore develop a sonorous quality that they can’t quite get rid of, so you think actors are as pompous as their voice is large. I suppose Damian was thinking of that a little bit, too.”

Lewis issued a statement yesterday in response: “I am hugely embarrassed that comments of mine have been linked in a negative way to Sir Ian McKellen.”

“I have always been, and continue to be, an enormous fan and admirer of Sir Ian’s. He’s one of the greats and one of the reasons I became an actor. My comment in the Guardian was a soundbite I’ve been giving since 1999 – it was a generic analogy that was never intended to demean or describe anyone else’s career. I have contacted Sir Ian McKellen and have given him my sincerest apologies.”

“There was no need for @Lewis_Damian to apologise to me, as I thought his comments were fair. But he’s a gentleman…Now I hope @lewis_damian enjoys @TheHobbitMovie DOS as much as I enjoy @SHO_Homeland.”

Sir Ian McKellen for the win!