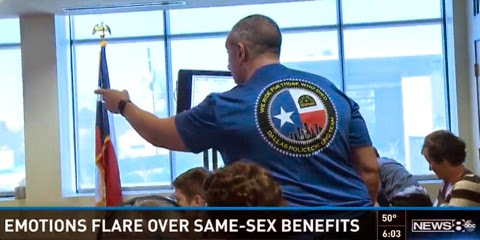 Thursday’s meeting of the Dallas Police and Fire Pension Board grew heated at times, as the board considered recognizing same-sex marriages. The best moment came when one police officer told the pension board to “grow the nuts that God gave a gnat and do it.”

The hours of squabbling and litany of failed attempts to spur the board to action stirred the police and fire personnel in the audience to speak out. Ernest Sherman (right) with Dallas police rose and shouted at the trustees.

“I have no dog in this hunt,” Sherman yelled. “But, by God, you’re a [expletive] police officer. So is she. So is she. They have the same right as you! Period!”

“You will vote today as a board, up or down,” Sherman continued, pointing at board members. “Grow the [expletive] that God gave a knat and do it!”

In the end, the board decided to punt the issue down the road until SCOTUS ruled on same-sex marriage.