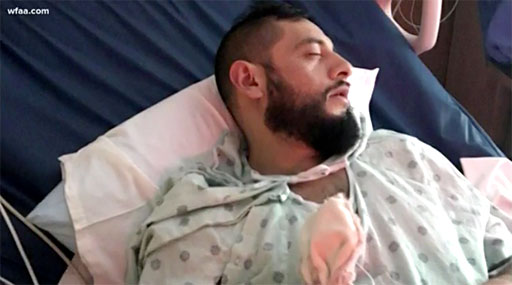 A popular karaoke host at the Dallas gay bar, the Round Up Saloon, is still suffering the severe after-effects of an apparent late night assault.

Oscar Rodriguez remembers leaving after his shift at the Round Up a little after 2 a.m. on April 14.

But the next thing he can remember is waking up in his car. There was no damage to his vehicle, his ID and cash were still on him, but his phone was missing.

Although he was experiencing an excruciating head ache, he was able to drive to his home in the neighborhood of Oak Lawn, but it soon became apparent he needed serious medical attention.

His roommate drove him to the hospital where he was diagnosed with a bleeding brain, a fractured skull, a broken jaw and several missing teeth. Surgery was required to wire his jaw shut and insert metal plates in his head.

Rodriguez’s friend and co-worker, Nikkii Meister, told WFAA News, “The doctors at Parkland (Hospital) said whoever did this intended for him to not walk away from it.”

With no memory of the assault, and no leads to go on, police have made no arrests in the case.

Additionally, Rodriguez has no health insurance, so the bills are mounting up quickly. With his jaw wired shut for several more weeks, he can’t work as a karaoke host without being able to talk.

A GoFundMe campaign has been launched to help defray the costs of his medical treatment.