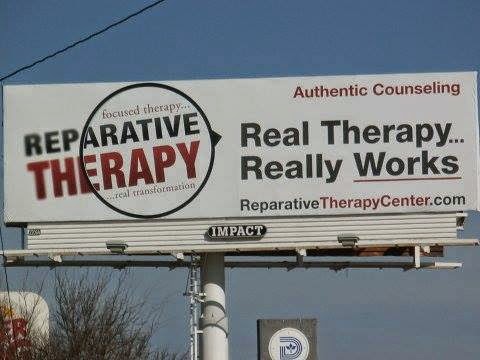 A Dallas billboard recently went up promoting the use of “ex-gay” or “reparative” therapy.

As many know today, these techniques are used to try and “convert” gays and lesbians from homosexual to straight. Organizations like the American Psychological Association consider the practices harmful and damaging.

ThinkProgress spoke with Terry Kafka, president of Impact Outdoor Advertising, the small Dallas billboard company that is hosting the ad. Kafka explained that they had been convinced the ad was for couples therapy, having never heard the term “reparative therapy” before.

He described the true content of the ad as “repulsive to me personally,” promising that the ad would be coming down by next week at the latest. “If we had known, we wouldn’t have put it up in the first place.”

The practitioner who placed the ad, David Pickup,  says his techniques are not meant to “suppress” homosexuality but “resolving issues that cause homosexuality.” He tells ThinkProgress that he believes no one is born gay but instead come about due to childhood “gender identity inferiority” and “unmet male emotional needs.”