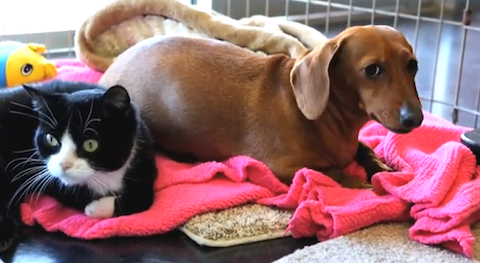 The Huffington Post shares this really great story for dog AND cat owners.

Ruth is the cat, who is paralyzed to some degree, and Idgie the dachsund is her best friend. They  were rescued together some month ago and are BFFs.

Ruth and Idgie were found about three months ago, abandoned at the end of a driveway
in Osteen, Fla., according to the Orlando Sentinel. The pair, named
after characters from “Fried Green Tomatoes,” were brought to Animal
Control and eventually taken in by Hollywood Houndz Boutique & Spa in Lake Mary, Fla., according to WFLX.

Now they’re simply inseparable, as captured in the Sentinel video
above. In fact, the friends are so close that when Idgie gets a new dog
toy, the first thing she’ll do is bring it over to Ruth.