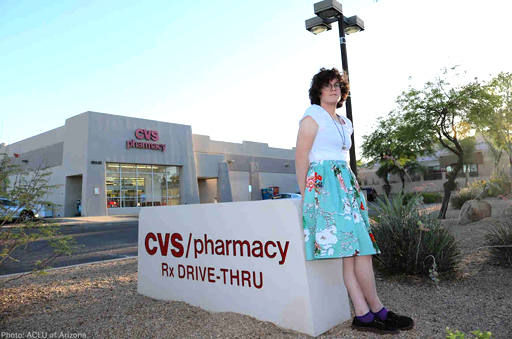 Penning a personal essay for the ACLU, Hilde Hall shared a sad turn of events on what began as one of the happiest days of her life.

Hall, a transgender woman, left her doctor’s office this past April with her first prescriptions for hormone therapy as she was about to begin the journey to seeing her body reflect her gender identity.

After handing over the three prescriptions from her doctor, a hormone therapy specialist, she was informed the pharmacist refused to fill one necessary to affirm her gender identity.

Without any specified reason, according to Hall, the pharmacist “kept asking, loudly and in front of other CVS staff and customers, why I was given the prescriptions.”

Embarrassed, Hall says she became distressed and nearly began to cry right there in the store.

“I didn’t want to answer why I had been prescribed this hormone therapy combination by my doctor,” writes Hall. “I felt like the pharmacist was trying to out me as transgender in front of strangers. I just froze and worked on holding back the tears.”

To make matters even worse, when Hall asked for the written prescriptions from the pharmacist so she could leave, he refused to return the written script.

Hall was forced to call her doctor’s office to intervene. But, according to reports, the pharmacist wouldn’t return the prescriptions without being told EXACTLY why the medication had been ordered.

In her essay, Hall shares she left the CVS store ‘feeling mortified.’

Eventually, the prescriptions were transferred to a Walgreens pharmacy where the meds were filled ‘without question.’

Hall adds that, after the insulting episode, she moved all of her prescriptions from CVS to Walgreens “so that I never again have to see the pharmacist who discriminated against me.”

She contacted CVS’ corporate complaint line several times but didn’t no one addressed her concerns initially.

It was after filing a complaint with the Arizona State Board of Pharmacy that CVS responded.

“CVS Health extends its sincere apologies to Ms. Hall for her experience at our pharmacy in Fountain Hills, Arizona last spring,” said in a statement to The Hill.

According to CVS, the employee had been dismissed, and assured Hall that it had not responded due to “an unintentional oversight.”

The company indicated the former employees attitude did not “reflect our values or our commitment to inclusion, nondiscrimination and the delivery of outstanding patient care,” CVS said.

It’s important to note that this isn’t a cautionary tale for just transgender people.

This easily could have been the case of a pharmacist refusing to fill a prescription for Truvada or “PrEP.” Or refusing to refill a birth control script.

At Walgreens, pharmacists are allowed to step down from filling scripts they find don’t align with their personal religious beliefs, but at least there is a company policy requiring another pharmacist step in to accommodate the customer’s needs.

This CVS pharmacist wouldn’t even return the written paper scripts. This was a guy taking out his own personal agenda against an innocent trans woman.