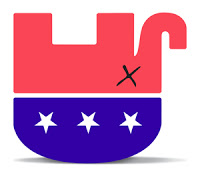 From ThinkProgress: At the beginning of the Bush presidency, the United States debt limit was $5.95 trillion. Despite promises that he would pay off the debt in 10 years, Bush increased the debt to $9.815 trillion by the end of his term, with plenty of help from the four Republicans currently holding Congressional leadership positions: Speaker John Boehner, House Majority Leader Eric Cantor, Senate Minority Leader Mitch McConnell, and Senate Minority Whip Jon Kyl.

ThinkProgress compiled a breakdown of the five debt limit increases that took place during the Bush presidency and how the four Republican leaders voted:

Database searches revealed no demands from the four legislators that debt increases come accompanied by drastic spending cuts, as there are now. In fact, the May 2003 debt limit increase passed the Senate the same day as the $350 billion Bush tax cuts for the wealthy.

When Bush was in office, the current Republican leaders viewed increasing the debt limit as vital to keeping America’s economy running. But with Obama in the White House, it’s nothing more than a political pawn.