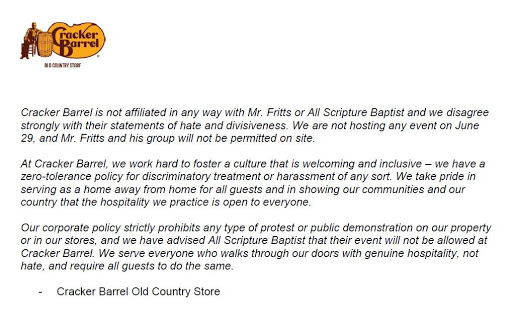 Fritss, who recently made national headlines for a series of sermonshe gave calling for police to round up and kill LGBTQ people (whom he referred to as ‘filthy animals’), had planned to hold a meeting at a Cracker Barrel restaurant in Cleveland, Tennessee, on June 29.

But the restaurant has turned the pastor and his church group away citing the company’s zero-tolerance policy for “discriminatory treatment or harassment of any sort.”

In a statement posted to the company’s Twitter account, Cracker Barrel wrote, “We strongly disagree with their statements of hate and divisiveness” and added that Fritts and his group “will not be permitted on site.”

“We take pride in serving as a home away from home for all guests and in showing our communities and our country that the hospitality we practice is open to everyone,” continued the statement.

In closing, the company wrote, “We serve everyone who walks through our doors with genuine hospitality, not hate, and require all guests to do the same,” said in closing.

Local LGBTQ activist David Tierney had spoken to the restaurant and jumped into action organizing a phone campaign.

Speaking to the Knoxville News Sentinel, Tierney said, “It is a small victory for our community and it took a lot of work for us to even get this accomplished.”

“This is all started as an online campaign and action, organized by direct message (online), then grew into a real action, and then got picked up by the states Democratic Party,” Tierney told the News Sentinel. “It really just spread like wildfire over the course of 5 days.”

Party chair Mary Mancini penned a letter to Cracker Barrel CEO Sandra Cochran reminding the executive of the company’s own pledge to honor inclusivity and diversity.

A letter to @CrackerBarrel CEO Sandy Cochran from @tndp chair @marymancini re: Grayson Fritts’ church, All Scripture Baptist, hosting an event at their store in Cleveland, TN. pic.twitter.com/VI6carVyaY

As Fritts’ controversial sermons went public earlier this month, he was allowed to use paid sick days until a Voluntary Workforce Reduction Buy Out program kicks in July 19 when he will retire with benefits.

Fritts has used his ‘sick leave’ to travel this past weekend to Orlando, Florida, where he took part in the three-day “Death to Gays” rally celebrating the 3rd anniversary of the Pulse Nightclub shooting which left 49 dead and more than 50 more injured.