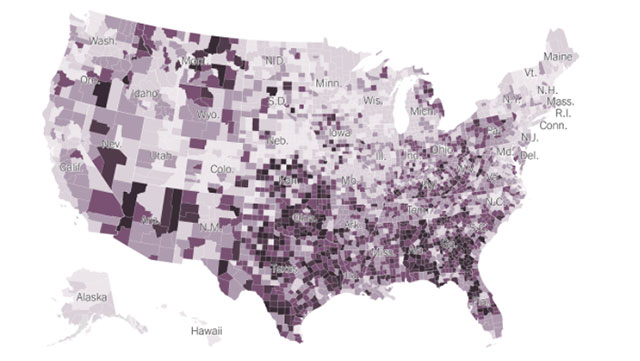 The New York Times’ David Leonhardt took a look at demographics and found what we already knew – the gap in the COVID-19 death toll between red and blue America has grown wider and wider.

The partisan gap in Covid deaths has grown even larger.

October was the fifth consecutive month that the percentage gap between the death rates in heavily Trump counties and heavily Biden counties widened.

October was the fifth consecutive month that the percentage gap between the death rates in Trump counties and Biden counties widened.

The true explanation is straightforward: The vaccines are remarkably effective at preventing severe Covid, and almost 40 percent of Republican adults remain unvaccinated, compared with about 10 percent of Democratic adults.

Charles Gaba, a Democratic health care analyst, has pointed out that the gap is also evident at finer gradations of political analysis: Counties where Trump received at least 70 percent of the vote have an even higher average Covid death toll than counties where Trump won at least 60 percent.

Read the full article at the New York Times.

The vaccines proved so powerful, and the partisan attitudes toward them so different, that a gap in Covid’s death toll quickly emerged.

It has grown over the course of this year and is now at its widest point. pic.twitter.com/pyWKHl4Ann

… It stems from disinformation — promoted by right-wing media, like Rupert Murdoch’s Fox News, the Sinclair Broadcast Group and online sources — that preys on the distrust that results from stagnant living standards.

As a result, Covid deaths have been concentrated in counties outside of major metropolitan areas. Many of these are in red states, while others are in red parts of blue or purple states, like Arizona, Michigan, Nevada, New Mexico, Pennsylvania Oregon, Virginia and California. pic.twitter.com/FpULcY4pbe