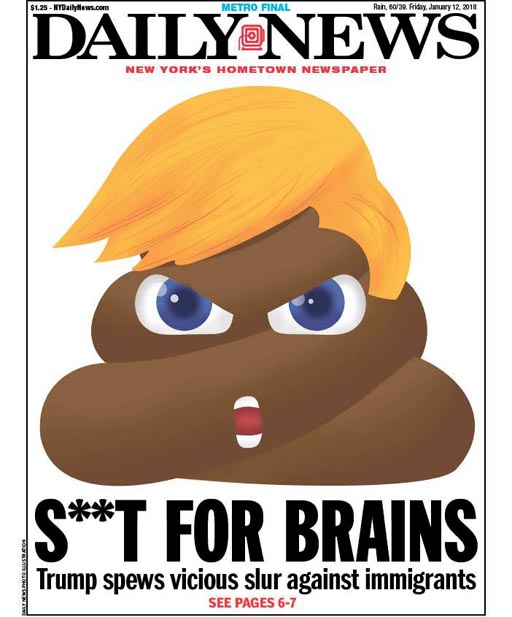 From the cover story of today’s New York Daily News:

Social media erupted Thursday after President Trump slammed protections for immigrants from “s–thole countries” in the Caribbean and Africa, while some leaders chose to ignore his controversial remarks.

“Why are we having all these people from s–thole countries come here?” the President reportedly griped during an Oval Office meeting Thursday afternoon.

Advocacy group leaders called Trump’s comments “racist” but chose not to focus on his latest attack on immigrants.

“How does one even react to that?” said Ninaj Raoul, co-founder of Haitian Women for Haitian Refugees (HWHR,) told the Daily News Thursday.

Multiple people were in the Oval Office and heard Trump say “shithole countries.”

He said it and instead of apologizing — he is lying. Trump is a RACIST and a LIAR.

My family came from Norway, and I can tell you that we Norwegians think Trump is a racist “shithole.”