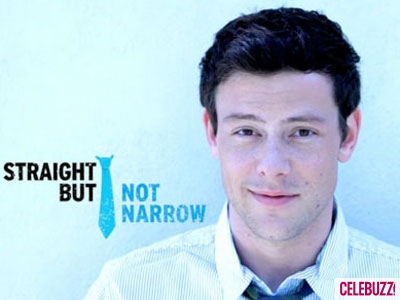 It was just announced that Glee star Cory Monteith, will be the new spokesperson for Straight But Not Narrow and will be starring in their latest PSA.

Straight But Not Narrow is a new and different campaign aiming to help support gay youth with a special message to straight males.

From the website: There have been a number of great campaigns and charities that have recently emerged to show support to gay youth & teens. However, we noticed one significant niche missing in the efforts…. the message to the young, straight male. It’s an unfortunate reality that most of the bullying and harassment that gay teens face comes from them. It is for this reason that we are building a campaign that is primarily directed to the young, straight male by using comedy and their peers to positively influence their views on LGBT teens.

So, whether you like girls, you like guys, you like both, you like neither (well, you get the idea)…. what difference does it really make? There’s a whole lot more to a person than who they date. And yeah, we’re all different. But we believe that it’s those differences that make us interesting. Why would we all want to be exactly the same? Where’s the excitement in that?

Just be you. Cause that’s good enough for us.