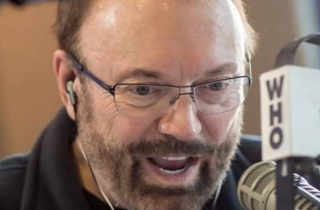 This week, Iowa-based conservative radio host Jan Mickelson took to the airwaves to share HIS solution to illegal immigration in the United States – “compelled labor,” or, something commonly known as slavery.

Mickelson is an extreme right-wing WHO Radio host and a close ally of Rep. Steve King of Iowa.

I would put them on the end of the highway, on western part of the interstate system, and I’d put them on the eastern side of the state, right there on the interstate system, and in the north on the Minnesota border, and on the south Kansas and Missouri border and I would just say this: “As of this date… 30 to 60 days from now anyone who is in the state of Iowa that who is not here legally and who cannot demonstrate their legal status to the satisfaction of the local and state authorities here in the State of Iowa, become property of the State of Iowa.” So if you are here without our permission, and we have given you two months to leave, and you’re still here, and we find that you’re still here after we we’ve given you the deadline to leave, then you become property of the State of Iowa. And we have a job for you. And we start using compelled labor, the people who are here illegally would therefore be owned by the state and become an asset of the state rather than a liability and we start inventing jobs for them to do.

[…] We’re going to invite the illegal Mexicans and illegal aliens to build [a border wall]. If you have come across the border illegally, again give them another 60-day guideline: “You need to go home and leave this jurisdiction, and if you don’t you become property of the United States, and guess what? You will be building a wall. We will compel your labor. You would belong to these United States. You show up without an invitation, you get to be an asset. You get to be a construction worker. Cool!”

Later in the radio show, a caller asked if this sounded a lot like slavery. Mickelson’s completely sober answer?

Head over to Mediaite to hear Mickelson calmly explain his plan.