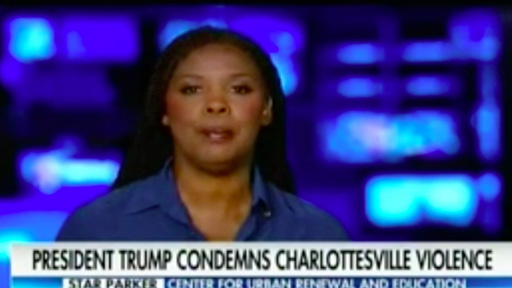 Conservative columnist and failed Republican candidate for Congress, Star Parker, told Fox and Friends’ co-host Steve Doocy that she agreed with Donald Trump’s initial claim that the violence and bigotry seen in Charlottesville over the weekend came “from many sides,” saying Trump was “on point.”


Parker then made an attempt at putting white supremacists who carry Nazi flags and drive cars through crowds of people with LGBTQ Pride goers who carry rainbow flags.

“These two flags represent the exact same thing. That certain people groups are not welcome here. So if Nancy Pelosi wants to say that we’re going to start shutting down First Amendment rights of a certain group of people, then what happens the next time that the homosexuals want to walk through an American city and protest and counter protesters come out?”

It seems to have slipped my mind the total number of deaths that occurred on Saturday at the hands of LGBQs driving cars through crowds of people. Can someone remind me?

It will come as no surprise that Parker has a long history of attacking the LGBTQ community, often describing us as “those choosing the homosexual lifestyle.”