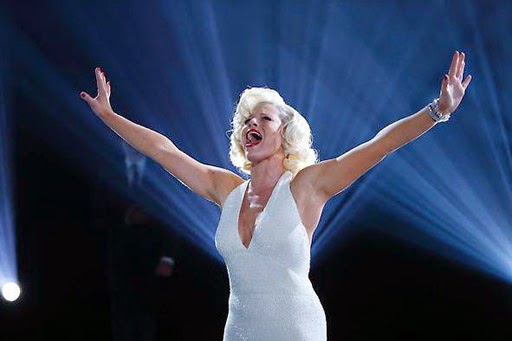 UPDATE: Only an hour after I posted this, the Kickstarter campaign passed the $125,000 mark.

In just a few hours, a Kickstarter campaign to help fund a concert of “Bombshell” – the fictional musical from NBC’s SMASH – raised over $75,000 with over 540 donors.

From the Kickstarter page:

We are raising money to put on the show of your dreams: A once-in-a-lifetime concert presentation of BOMBSHELL to benefit The Actors Fund.

The cast is donating their time, as is the whole creative team.* But we do need to raise $50,000 to cover the costs of the production and to assure that 100% of the proceeds will go to The Actors Fund to help people in the creative community who are in need, crisis or transition.

If you love this show – and you know you do – please consider a contribution large or small to help bring this evening to life. We have a great list of rewards at different tax-deductible donation levels to say THANK YOU for your support.

On Monday, June 8, 2015, at the Minskoff Theater, in New York City, we will present: Christian Borle, Will Chase, Megan Hilty, Katherine McPhee and Debra Messing.

Completing the cast will be a starry collection of Broadway favorites. BOMBSHELL features the Emmy nominated songs “Let Me Be Your Star” and “Hang the Moon.” This is a night not be missed.

BOMBSHELL will be co-directed by Scott Wittman and Josh Bergasse with Musical Numbers Choreographed by Josh Bergasse.

I loved much of SMASH during it’s two seasons on the air. And by far the best parts of the show were the musical numbers skillfully staged by Josh Bergasse and company.

I’m thrilled this concert is happening. If you’re in NYC on June 8th, this will be the hardest ticket in town to get. Guaranteed.