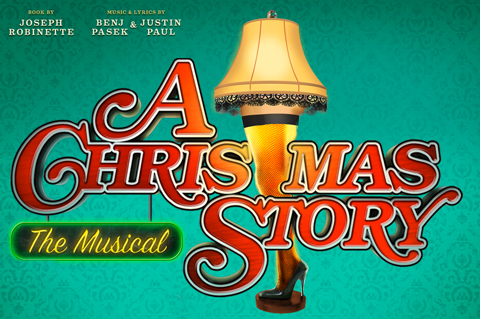 With heat sweeping the country right now in the dead of summer comes some holiday news…  (why not?)

Christmas Story, The Musical! will arrive on Broadway at The Lunt-Fontanne Theatre just in time for the 2012 holiday season. The producers have announced that the new musical, based on the 1983 movie perennial, will play a November 5 – December 30 holiday engagement. Opening night is Monday, November 19.

America’s #1 holiday movie came to hilarious life onstage when A Christmas Story, The Musical! launched a tour in 2011. The musical features a holiday score by composer/lyricist team Benj Pasek and Justin Paul and a book by Joseph Robinette based on the writings of radio humorist Jean Shepherd and the 1983 holiday film favorite.

The story from a cherished movie classic that’s enchanted millions is now a musical spectacular. In 1940’s Indiana, a bespectacled boy named Ralphie has a big imagination and one wish for Christmas—a Red Ryder BB Gun. A kooky leg lamp, outrageous pink bunny pajamas, a cranky department store Santa, and a triple-dog-dare to lick a freezing flagpole are just a few of the obstacles that stand between Ralphie and his Christmas dream.

Co-produced by the film’s original Ralphie, Peter Billingsley, A Christmas Story, The Musical! is holiday entertainment that captures a simpler time in America with delicious wit and a heart of gold.

For more info go to http://achristmasstorythemusical.com