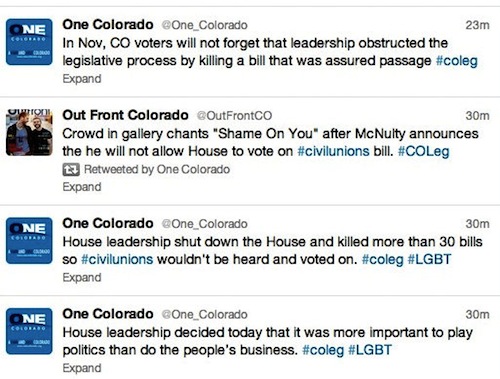 Last night after the North Carolina vote to write discrimination into law, I followed the mind numbing debacle in Colorado where civil unions was within ONE vote to being made law.

GOP state senators filibustered and effectively killed the civil unions bill – and in doing so also killed about 30 other bills in line for debate and vote – by stopping the work of the people for hours.

To add insult to injury, the GOP law makers tried to spin the story that Dems were the problem.

Hickenlooper’s announcement on the final day of the 2012 regular session was sparked by what he called an “overwhelming need” to discuss the civil unions measure. It died late Tuesday on legislative maneuvering from the GOP.