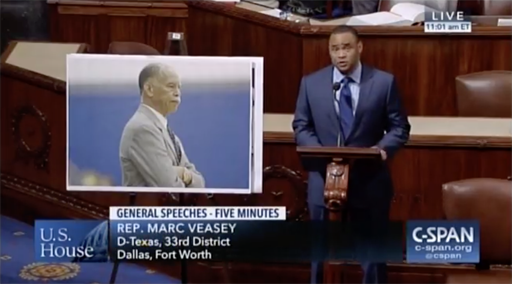 It is with great personal pride that I share this video.

Rep. Marc Veasey of Texas honored Coach Robert Hughes Sr. from the floor of the House of Representatives today in advance of Coach Hughes’ induction into the Basketball Hall of Fame this weekend.

As many of my readers know, my birth mother passed away when I was very young, and as the saying goes, “it takes a village.”

My “village” was/is the Hughes family. My best friend, Carlye Hughes, and I faced our early years into adulthood together from Fort Worth, Texas, to chasing our dreams in New York City.

Along the way, I became an “honorary” Hughes and have been a member of the family for over 35 years. I called Carlye’s mother “Mother,” and her father, “Coach.”

Coach Hughes (in Texas being a coach is like being a doctor or clergy – it’s an official title), is THE winningest high school basketball coach in all the United States.

In addition to teaching the art and skills of basketball, Coach has spent decades as a leader in the community in Fort Worth. He kept the high school gym open during summers so kids would have a place to go (and stay out of trouble). He inspired countless young folks to become the best they could be. Including me.

I’m so proud to know Coach and to see this so-very-well-deserved honor happen in Springfield, Massachusetts, this weekend.

Watch below as Congressman Veasey speaks from the floor of the House this morning.