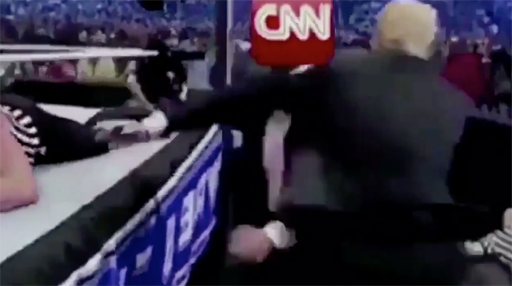 Last night, I posted an apology that was apparently written by the Reddit user who created the now-infamous “Trump Beats CNN” video. You can read the full apology here.

Initially, when Donald Trump tweeted the video, the user – who used the screen name “HanAssholeSolo” – exalted in taking credit for the viral video.

But once the public became aware of who the poster was, anti-semitic and racist imagery was also discovered by the user and shared on social media.

The apology happened only after a reporter at CNN was able to figure out who the user was, and tracked him down.

The apology came after CNN’s KFile identified the man behind “HanA**holeSolo.” Using identifying information that “HanA**holeSolo” posted on Reddit, KFile was able to determine key biographical details, to find the man’s name using a Facebook search and ultimately corroborate details he had made available on Reddit.

On Monday, KFile attempted to contact the man by email and phone but he did not respond. On Tuesday, “HanA**holeSolo” posted his apology on the subreddit /The_Donald and deleted all of his other posts.

The user further apologized for calls for violence against the press in his statement on Reddit.

“The meme was created purely as satire, it was not meant to be a call to violence against CNN or any other news affiliation,” he wrote. “I had no idea anyone would take it and put sound to it and then have it put up on the President’s Twitter feed. It was a prank, nothing more. What the President’s feed showed was not the original post that was posted here, but loaded up somewhere else and sound added to it then sent out on Twitter. I thought it was the original post that was made and that is why I took credit for it. I have the highest respect for the journalist community and they put their lives on the line every day with the jobs that they do in reporting the news.”

The apology has since been taken down by the moderators of /The_Donald subreddit.

After posting his apology, “HanA**holeSolo” called CNN’s KFile and confirmed his identity. In the interview, “HanA**holeSolo” sounded nervous about his identity being revealed and asked to not be named out of fear for his personal safety and for the public embarrassment it would bring to him and his family.

CNN is not publishing “HanA**holeSolo’s” name because he is a private citizen who has issued an extensive statement of apology, showed his remorse by saying he has taken down all his offending posts, and because he said he is not going to repeat this ugly behavior on social media again. In addition, he said his statement could serve as an example to others not to do the same.

CNN reserves the right to publish his identity should any of that change.

So what have we learned here?

That these trolls on the interwebs are basically looking for attention and reactions for their icky statements. As long as they get to be anonymous sitting behind a keyboard.

But when you pull them out into the light, suddenly they “didn’t mean any of it” and “have the highest respect…”

Good on CNN for finding the troll.