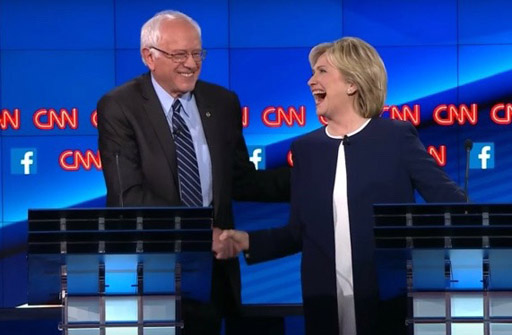 CNN can be happy about the audience last night’s Democratic Debate drew as preliminary estimates show 15.3 million viewers tuned in to watch Hillary, Bernie and company.

That marks the largest TV crowd for a Democratic debate ever. Before last night, the top number was the 2008 Philadelphia debate on ABC with 10.7 viewers.

The RNC will surely point out that the Dems didn’t come close to this years record setting GOP debate that drew over 25 million viewers.

But then, there were no “reality stars” on the stage last night in Las Vegas. Only substantive discussions about what’s best for the country.

Perhaps an indication of the Democratic party representing younger audiences, CNN did point out that the number of viewers who watched via streaming devices (phones, laptops, tablets) reached over 980,000 at it’s peak. That number surpasses the best of any Republican debate which has only topped out at 921,000.