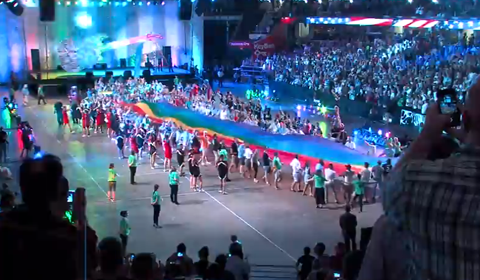 The opening ceremony of Gay Games 9 was held last night in Cleveland at the Q Arena.

The team from San Francisco led the athletes into the arena, but the Russian team saw special support when announced due to the recent anti-gay legislation and rhetoric in the country.

Over 9,000 participants and 20,000 spectators will enjoy 35 athletic competitions in the Cleveland/Akron area over the next week.

During the ceremonies, a greeting sent from President Obama was played welcoming the athletes and spectators. Obama referenced the struggles of Russian gays in his greeting:

“I know some of you have come from places where it requires courage, even defiance, to come out – some times at great personal risk. You should know that the United States stands with you and for your human rights – just as our athletes stand with you on the field at these Games.

“After all, the very idea of America is that no matter who you are, what you look like, where you come from, or who you love – you can make it if you try. That’s who we are and that’s who we should continually strive to be.”