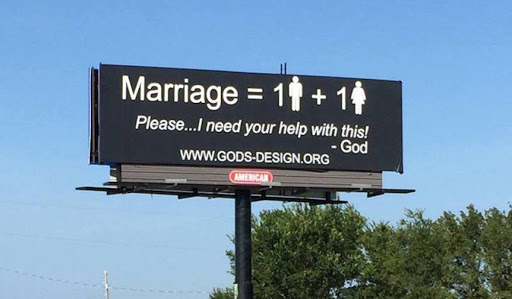 Gay Star News reports on the latest project by the Odgaards, the Iowa couple who refused to host same-sex weddings in their art gallery (straight weddings were welcome).

The “Christian” couple were fined $5,000 for violating the state’s public accommodation laws since “open for business” means “open to everyone.”

Rather than allow the icky gay weddings, they voluntarily chose to stop hosting weddings at all.

Well, it all that freed up time, the couple established a tax-exempt charity called God’s Original Design Ministry, and has embarked on posting 1,000 billboards denouncing marriage equality. The first billboard went up south of Durant, Oklahoma a week ago.

‘This billboard is funded 100% by the your generous donations. One down and 999 to go for 1,000 points of light. Thank you and God bless!’ the Odgaards wrote in a post on new ministry’s Facebook page.

But the sign has been roundly condemned in the comments underneath.

‘Hate doesn’t look great on either side. Since it costs approximately between 500 and 8,000 to do this, that would help clothe and feed alot of homeless people (but I’m assuming only if they aren’t gay)?!’ wrote one.

‘I love how you forged God’s signature at the bottom!’ said another

The Odgaards recently appeared in a Ted Cruz campaign video in which they claimed they were ‘forced’ to close their wedding business because of their religious beliefs after they turned away a gay couple.