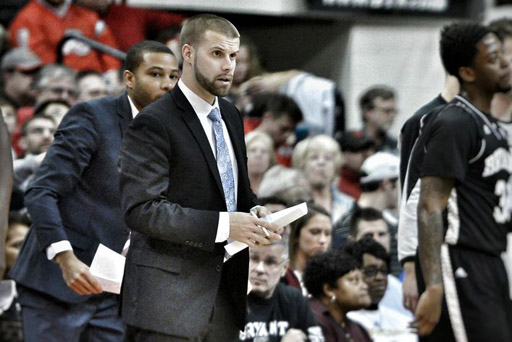 Burns shares his journey from closeted New Hampshire high school basketball to successful college player, and now assistant coach. He includes how he felt about his first boyfriend, who was also in basketball, and how being closeted kept him detached from everyone around him.

Ultimately, it was the historic SCOTUS ruling this past June on marriage equality that gave him the courage to reveal his truth to the world.

That day, when the Supreme Court released its decision, was when I knew beyond anything else: This is all bigger than myself.

There is no greater feeling than being a part of something bigger than just you. That’s what has always made sports so special for me.

Since I started telling people in college basketball over the last few months, I’ve realized my fears were far worse than reality. I’ve realized that people, for the most part, are human beings first. For a guy who’s relatively cynical and can be negative, the reactions of people in my sport and in my life have shut me right up and reenergized my hope in the human spirit, in empathy.

You’ve got to give the majority of people credit for changing attitudes and credit to all the people who have worked to make that possible. Things have gone fairly well for me so far.

Like the people before me, I hope my story empowers someone, even if it’s just one person. But it’s a process for everyone.

My advice: Take your time and be comfortable. Everyone’s personal journey is special and unique, and no one should feel pressure to do anything they aren’t comfortable with.

But always know this: When the time comes to share your true self, you will feel so much love and relief and hope and freedom. It’s a truly special feeling, and I just can’t thank enough every single person who has helped guide and support me to this point.

Chris shared with USA Today how it all went down when he came out to his team:

“There are parts of this business that lead me to believe what I’m about to tell you is not acceptable here,” the assistant coach says. “This is something I struggle with. It’s made me consider giving up coaching. It’s made me think I’m not supposed to be here.”

He goes on to say he hopes none of this will affect the players negatively, that he wants it to unite them. Bryant’s players surround him with hugs. They tell him they love him. He can exhale.

Congratulations Chris! Your coming out will empower many, many more closeted folks to find their own courage in time. And many of them will no doubt be athletes who need a positive role model to look to.

Thanks for stepping up and being that person.