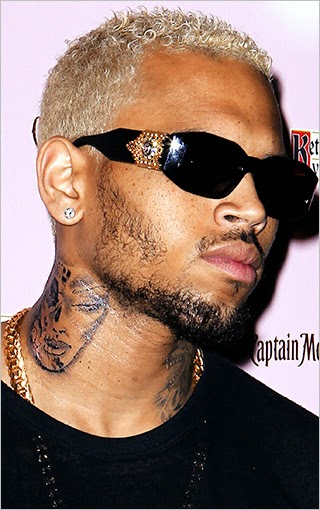 Singer Chris Brown appears to be in trouble yet again for an alleged violent attack. This time some homophobic slurs are alleged to have been slung around by Mr. Brown:

The Grammy Award-winning singer allegedly punched the man in the face early Sunday morning outside of the W Hotel in Washington, D.C., after the victim, Issac Adams Parker, tried to jump into a photograph being taken of Brown and a witness, reports to the Associated Press.

The report notes that Brown, who was in D.C. to perform at a club, said, “I’m not into that gay shit,” and “I feel like boxing,” before punching the 20-year-old man in the face. Brown’s companion and supposed bodyguard, Christopher Hollosy, 35, also stepped into the fray and punched Parker in the face. Officials say the incident occurred at around 4:30 a.m.

Parker was treated for his injuries, including a broken nose, at a local hospital and released Sunday. Police say the felony charge is related to the extent of the damage Parker sustained.

The R&B singer is currently on probation, which he initially received for assaulting Rihanna, his girlfriend at the time, in 2009. The probation was reinstated in August, after his involvement with an alleged hit-and-run occurrence.