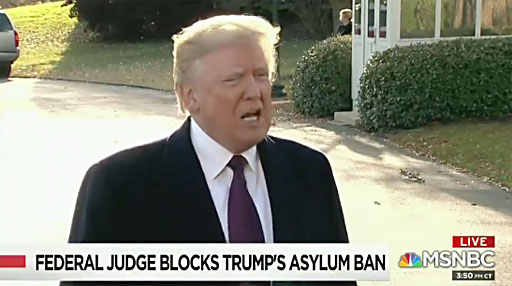 Responding to a reporter’s question about a 9th Circuit appellate judge blocking his administration’s attempt to deny asylum to migrants trying to lawfully enter the country, Donald Trump lashed out saying, “This was an Obama judge and I’ll tell you what, it’s not going to happen like this anymore…We will win that case in the Supreme Court of the United States.”

Here is the “Obama judge” comment of Trump’s that John Roberts smacked down. pic.twitter.com/lJCEM2Em8a

It turns out the Chief Justice of the United Supreme Court didn’t take that ‘Obama judge’ comment lightly.

“We do not have Obama judges or Trump judges, Bush judges or Clinton judges,” Chief Justice John Roberts said in a statement to the Associated Press. “What we have is an extraordinary group of dedicated judges doing their level best to do equal right to those appearing before them. That independent judiciary is something we should all be thankful for.”

Sorry Chief Justice John Roberts, but you do indeed have “Obama judges,” and they have a much different point of view than the people who are charged with the safety of our country. It would be great if the 9th Circuit was indeed an “independent judiciary,” but if it is why……— Donald J. Trump (@realDonaldTrump) November 21, 2018

…..are so many opposing view (on Border and Safety) cases filed there, and why are a vast number of those cases overturned. Please study the numbers, they are shocking. We need protection and security – these rulings are making our country unsafe! Very dangerous and unwise!— Donald J. Trump (@realDonaldTrump) November 21, 2018

Trump attacks a federal judge who ruled against him as “an Obama judge.” Chief Justice Roberts rebukes: “We do not have Obama judges or Trump judges, Bush judges or Clinton judges.” Will be interesting to see how Roberts acts going forward as Trump attacks independent judiciary.

chief justice roberts rebuke of p. trump’s reaction to a 9th circuit judge’s ruling on immigrants was welcome and important.
the constitutional framework of the American govt is designed to withstand presidential abuse.
no trump hissy fit will change that

If you’re watching the news, Chief Justice Roberts just stood up for an independent judiciary.

If you’re watching “Hannity,” Chief Justice Roberts just outed himself as an open-borders Venezuelan-style socialist who hates our troops and is coming for your guns and Bibles.