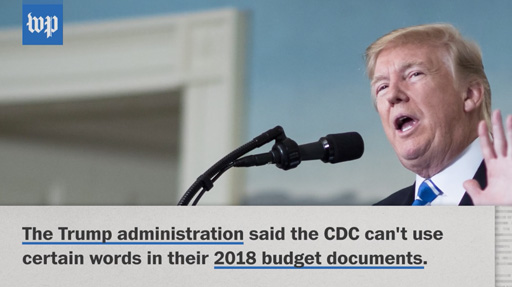 The Center for Disease Control has been issued a list by the Trump administration of banned words in official documents in preparation for next year’s budget.

How does a health agency not use the words evidence-based?

The question of how to address such issues as sexual orientation, gender identity and abortion rights — all of which received significant visibility under the Obama administration — has surfaced repeatedly in federal agencies since President Trump took office. Several key departments — including HHS, as well as Justice, Education, and Housing and Urban Development — have changed some federal policies and how they collect government information about lesbian, gay, bisexual and transgender Americans.

In March, for example, HHS dropped questions about sexual orientation and gender identity in two surveys of elderly people.

HHS has also removed information about LGBT Americans from its website. The department’s Administration for Children and Families, for example, archived a page that outlined federal services that are available for LGBT people and their families, including how they can adopt and receive help if they are the victims of sex trafficking.