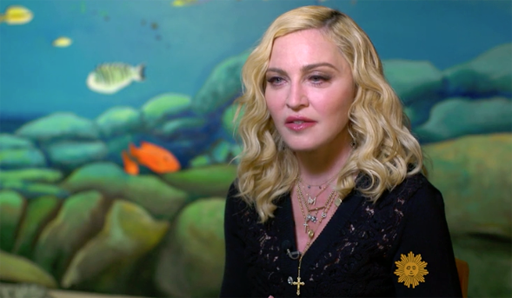 CBS’ Sunday Morning does well by Madonna in this spotlight on the newly opened hospital in Malawi she’s spent years helping to build.

It was the first time she’d seen the finished building. “Oh my gosh, what a beautiful hospital!” said Madonna. “It’s the brightest, most cheerful hospital entrance I’ve ever seen.”

The Mercy James Pediatric Surgery Center (named for her adopted daughter) has new operating rooms and a children’s ICU.

And there are few other options: hospital beds in Malawi are scarce, and children often have to compete with adults for thinsg like intensive care.

Madonna didn’t know much about Malawi when she made her first trip there in 2006. “I did have to look it up on a map, I’m not gonna lie,” she said. “This is a very small country, bordered by Mozambique and Zambia. And it was the best trip I ever made.”

“Because it changed my life.

At one point, Madge explains that she was inspired in part to build the hospital by the shoddy treatment she witnessed gay men experience during the height of the AIDS epidemic in New York City.